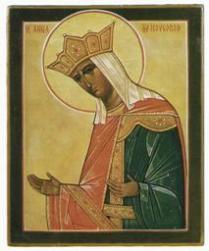 Sigtuna celebrates Ingegerd – the Swedish princess who became a Russian saint, with her own day, June 4. The daughter of the king Olof Skötkonung, Ingegerd, who grew up in Sigtuna, became a Grand Princess of Kiev in her marriage with of Yaroslav I the Wise of Kiev. The marriage became child rich and five of the sons became Russian Princes and three of the daughters became European queens. She was by her death on February 10 1050, declared as Orthodox saint and is now revered as Anna of Novgorod. A strange destiny in the Swedish history.

On June 4 you have the possibility to enjoy the day of Ingegerd in Sigtuna starting at 11 am at the Main Square in Sigtuna. The day is filled with exciting lectures in Swedish and Russian at “Gröna Ladan”. At Sigtuna Museum you can listen to Russian music, get inspired by an Icon exhibition and even where try to paint your own icon. City tours will be held in Swedish and Russian and finally a Russian-Orthodox Service close the day at 6 pm in the church ruin of St Olof.
Included in the ticket price you can enjoy Russian pirogues and tea in the garden of the Museum.
You are welcome to be inspired!
Ticket price 60 sek (to be purchased at Sigtuna Tourist information or Sigtuna Museum)