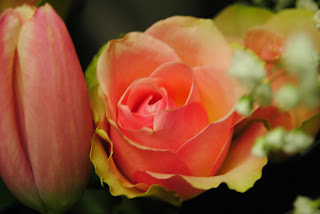 The air traffic control tower, VIP Service, the chapel – or why not a real jumbo jet? Some 450 couples chose Stockholm-Arlanda as the setting for their wedding last year. Same-sex weddings were an option for the first time in 2010.

It is popular for people to give their honeymoon precedence at Stockholm-Arlanda Airport. In 2010, nearly 450 couples opted to get married at the airport in connection with a trip.
“For couples that want to give priority to their honeymoon, a wedding at the airport right next to where their flight departs is a good solution,” says Anders Bredfell, press relations manager at Swedavia Arlanda.
The majority of couples at Stockholm-Arlanda chose a church wedding.
“Of the 261 couples that were married in a church ceremony, 200 couples chose to wed in the airport chapel. An important new development last year was the option of same-sex weddings. We had five same-sex weddings under the auspices of the Church of Sweden at Stockholm-Arlanda in the past year,” says Anders Berglund, an airport minister at Stockholm-Arlanda.
Some 25 couples chose to get married 74 metres up in the air, on the air control tower’s visitors balcony, with a view of the entire airport. Tower weddings are part of Arlanda VIP Services’ range of wedding options and include full service – check-in, the couple’s own lounge with catering and champagne and then transport straight to the waiting aircraft.
A new addition for 2011 is the perfect wedding gift for couples who are already married and heading off on their honeymoon trip – they start the honeymoon at Stockholm-Arlanda with exclusive VIP service.
Jumbo Stay, the only hotel in the world that is an actual jumbo jet, also offers weddings at the airport.
Take the opportunity and join the contest for an exclusive wedding package here at arlanda.se. Win a trip around the world and VIP service! The contest runs from Friday, January 28, 2011, to Sunday, February 20, 2011.

Facts about weddings at Stockholm-Arlanda:

A church ceremony in the chapel is free of charge. No other services are included. At least one of the two people marrying must belong to the Church of Sweden.