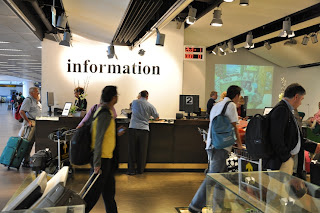 Last year, 1.4 million travellers visited the Arlanda Visitor Center in Terminal 5 at Stockholm-Arlanda, which is an increase of 60 per cent compared to 2009. As a result, the airport is the most frequently visited tourist information centre in Sweden.

“The target for 2010 was to get one million visitors. The 60 per cent increase, to 1.4 million, is better than we dared hope. More people have discovered the Arlanda Visitor Center – we are becoming more widely known among travellers. Our collaboration with the tourism industry in the region has clearly helped,” says Gunnar Salomonsson, Head of Swedavia Passenger Services at Stockholm-Arlanda Airport.
Overall, Stockholm-Arlanda had 17 million passengers in 2010, an increase of six per cent compared to 2009. Those visiting Arlanda Visitor Center represent a cross-section of travellers at the airport.
“During the summer and on weekends, most visitors are tourists visiting Stockholm. On weekdays, it is business travellers. Many people also take the opportunity to visit the centre at night, when it is open but unstaffed. The most frequently asked question? How do I get to Stockholm?” Mr Salomonsson says.
The concept of a combined tourist/airport information centre has inspired other airports to start up similar operations. The Malmö Airport Visitor Center recently opened at Malmö Airport.

About the Arlanda Visitor Center